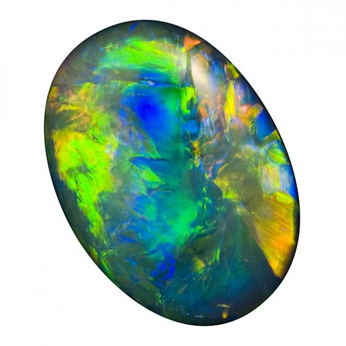 Opal
The Op﻿al - Oc﻿tobe﻿r birthstone
﻿"October's child is born for woe,
And life's vicissitudes must know,
But lay an opal on her breast,
And hope will lull those woes to rest."﻿
- Anonymous

Definiti﻿on
The word Opal is derived from the Latin word "opalus" which means "a stone".

Characteristics
For those who were born in the month of October the Opal is the traditional birthstone. The properties with which the Opal is associated are  hope, innocence and purity. The Traditional Metaphysical Properties for the October Birthstone Opal are happiness, faithfulness, loyalty and confidence. The healing properties of the October birthstone are reputed to be effective for health problems relating to the eyes and eye infections. The Opal is also used to enhance visualization, imagination, dreams and healing.

Physical Properties
The precious opal presents a peculiar play of colours of delicate tints, and is highly esteemed as a gem. One kind, with a varied play of colour in a reddish ground, is called the harlequin opal. The White opal has a white body colour with pastel glints of rainbow colour. Black opal has a blue, grey or black body colour. The black Boulder opal contains ironstone. Crystal or water opal is The transparent or colourless opal contains brilliant flashes of colour within it. Fire opal is a transparent or a translucent opal with a yellow, orange or red body colour that may also have a flash of colour. The Common opal has a milky appearance. Menilite is a brown impure variety, occurring in concretions at Menilmontant, near Paris. Other varieties are cacholong, girasol, hyalite, and geyserite. The crystal structure of the Opal (hydrous silicon dioxide) is Amorphous. Opal miners restrict use of the term opal to precious opal, calling material that does not show a good play of colours, 'potch'. Opals are principally found in Australia, Mexico and the U.S.

History
Writers have compared opals to volcanoes, galaxies, and fireworks. Admirers gave extraordinary opals poetic names like Pandora, Light of the World, and Empress. In ancient Rome, this gem symbolized love and hope. The Romans gave it a name—opalus—that was synonymous with “precious stone.”

In 75 AD, the Roman scholar Pliny observed, “Some opali carry such a play within them that they equal the deepest and richest colors of painters. Others…simulate the flaming fire of burning sulphur and even the bright blaze of burning oil.” He marveled that this kaleidoscopic gem encompassed the red of ruby, the green of emerald, the yellow of topaz, the blue of sapphire, and the purple of amethyst.

Many cultures have credited opal with supernatural origins and powers. Arabic legends say it falls from the heavens in flashes of lightning. The ancient Greeks believed opals gave their owners the gift of prophecy and guarded them from disease. Europeans have long considered the gem a symbol of hope, purity, and truth.