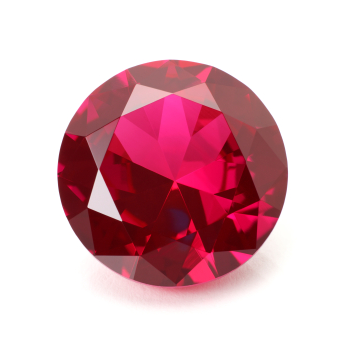 Ruby
The Ruby - July birthstone
"The gleaming Ruby should adorn,
All those who in July are born,
For thus they'll be exempt and free,
From lover's doubts and anxiety."
- Anonymous

Definition
The word Ruby is derived from the Latin word "ruber" which means "red" which reflecting the colour of the stone.

Characteristics
For those who were born in the month of July the Ruby is the traditional birthstone. The Ruby is associated with devotion, integrity, courage and happiness. The Traditional Metaphysical Properties for the July Birthstone Ruby are  vitality, confidence and strength. The healing properties of the Ruby are reputed to be effective for health problems relating to the blood and infection and increasing positive thought patterns. The Ruby is also used to enhance energy, generosity and to bring prosperity and success.

Physical Properties
﻿The Ruby is precious stone of a carmine red colour, sometimes verging to violet. It is a red crystallized variety of corundum. The Ruby is a member of the Corundum (aluminium oxide) family. The crystal structure of the Ruby is Hexagonal (trigonal), dipyramidal. Fine-quality ruby is extremely rare, and the color of the gem is most important to its value. Rubies are extremely hard, second only to diamonds. Ruby is mined throughout Southeast Asia and while the majority is found in Thailand and Myanmar (Burma),  exquisite gems also are found in Sri Lanka and Africa.﻿

Ruby is one of the most historically significant coloured stones. Rubies are mentioned four times in the Bible, in association with attributes like beauty and wisdom. In the ancient language of Sanskrit, ruby is called ratnaraj, or “king of precious stones.”

In the first century AD, the Roman scholar Pliny included rubies in his Natural History, describing their hardness and density. Ancient Hindus believed that those who offered fine rubies to the god Krishna were granted rebirth as emperors.

Hindus divided ruby into four castes, calling the true Oriental ruby a Brahmin. Someone in possession of a Brahmin was believed to have the advantage of perfect safety.

Ruby has accumulated a host of legends over the centuries. People in India believed that rubies enabled their owners to live in peace with their enemies. In Burma (a ruby source since at least 600 AD—now called Myanmar), warriors possessed rubies to make them invincible in battle. However, it wasn’t enough to just wear the rubies. They had to insert them into their flesh and make them part of their bodies.