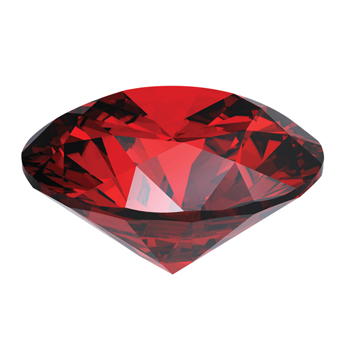 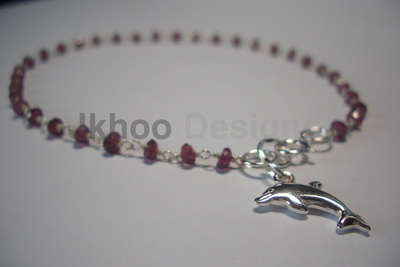 Garnet anklet
The Garnet - January birthstone
"By her who is this month was born
No gem save garnets shall be worn
They will ensure her constancy
True friendship and fidelity."
- Anonymous

Definition
The word garnet is derived from the Greek word "granatum" which means "pomegranate seed" which reflect the shape and colour of the crystals. Pure crystals of garnet are used as gemstones. The garnet family contain 7 major types: almandine, andradite, demantoid, grossularite, pyrope, spessartite, uvarovite stones.

Characteristics
For those who were born in the month of January the garnet is the traditional birthstone. It is the gemstone for Capricorn and also for The January birthstone poem reflects some of the properties with which the garnet is associated - purity, truth, faithfulness and friendship. The Traditional Metaphysical Properties for the January Birthstone Garnet are  awareness, commitment, regeneration, insight and removing negativity. The healing properties of the January birthstone are reputed to be effective for health problems relating to the blood, heart, lungs and infection. The garnet is also said to enhance sensuality and sexuality.

Physical Properties
Garnets are a group of hard glassy minerals (silicates of various metals) used as gemstones and as an abrasive. The crystal structure of the garnet is isometric, rhombic, dodecahedron. The traditional colour associated with the garnet is the deep red colour but garnets can be found in nearly all other colours including orange, yellow, green, purple, brown, black, and colourless dependant upon the minerals present at the time they were formed.  Today, the most important sources for garnet are Africa, Sri Lanka, and India.

History
The deep red garnet (also called Bohemian garnet) was strongly favoured as a popular gem in Victorian jewellery. References to the gemstone dates back to 3100 B.C., when the Egyptians used garnets as inlays for jewellery. The meaning of colours through the ages represented many aspects of life. Social, religious, biblical and Christian symbolism were all reflected in the colour Red!  The symbolic meaning of the colour red was was of fire and was associated with power and importance.